The history of the automobile through time

We see them every day, but we often forget they’re one of the most important inventions of the 20th century. From the first steam-powered vehicles to self-driving cars, from the famous Ford Model T to muscle cars, automobiles have never stopped evolving, as you can see in our episode of Roadside stories, devoted to the topic.

Watch the video and then learn more with our timeline!

German engineer Carl Benz invents the Benz Patent-Motorwagen, the first three-wheeled prototype with an internal combustion engine, while Gottlieb Daimler and Wilhelm Maybach present their four-wheeled automobile with four-stroke gas engine at the 1889 Paris World’s Fair. Anecdote: Benz had to get the authorization of the Grand Duchy of Baden to drive his car on public roads after people complained about the noise and smells from the car. This was pretty much the first driver’s license in the world.

The first mass-produced gas-powered car, the Panhard & Levassor Type A, sees the day in France. Model no. 77 is given the name Antoinette and travels 40,000 km in 26 years of service. Antoinette is now on display at La Cité de l’automobile, in Alsace.

Canada’s first gasoline-powered car, built by George Foote Foss appears on the road in Sherbrooke in the Eastern Townships. In 1900, Henry Ford himself shows interest in the Fossmobile, but its inventor declines the proposition!

Abram Neiman invents the first anti-theft device, originally composed of 75 small moveable parts, and later called the “butterfly” due to its shape.

Nokian Tyres, a Finnish company, invents the winter tire for transport trucks. Two years later, they’re made for cars too. In actual fact, this was a four-season tire.

Worldwide car production soars, going from 10 million to 30 million cars, within the space of 30 years. This era is called the Glorious Thirty. 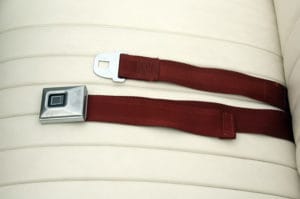 Automaker Nash Motors, followed by Ford in 1955, offers a safety belt option, and in 1958, Swedish automaker Saab is the first to install the standard seatbelt in its cars. It’s not until 1970 however, that a government—in this case, the state of Victoria in Australia—officially makes seatbelts mandatory.

The nationalization of the Suez Canal shoots up gasoline prices, creating a crisis in the auto industry. Manufacturers must now consider their models’ fuel consumption. By 1959, compact cars first appear, including the Chevrolet Corvair and Chrysler Valiant in North America.

Two patents for children’s seats see the day. Before this, kids were often placed in booster seats—more for the driver’s practical benefit than for safety.

The Jensen FF is the first car with anti-lock braking system (ABS) brakes. It’s not until 1985 with the Ford Scorpio that ABS becomes part of mass-production.

Safety airbags appear in production cars in the 1974 Buick Cadillac and Oldsmobile, twenty years after the first patents for such an innovation.

Hybrid electric cars arrive on the market, with the Toyota Prius in the lead. Between 1997 and 2003, the first-generation Prius is only offered in Japan. 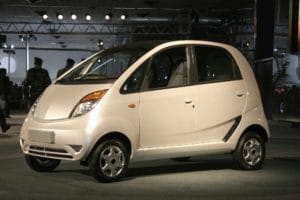 Another oil crisis leads to the production of low-cost cars like the Dacia Logan and the Tata Nano, which was launched in India in 2008 for around $2,000 in US dollars.

What does the future hold for the automobile?

The future of the car will see two major trends: self-driving cars and research on new propulsion methods.

Autonomous cars like Google Car and Uber and Tesla Motors self-driving cars seem to have come straight out of a science fiction book. The coming of driverless cars had actually already begun in 1990, but they’ve taken a lot of fine-tuning, and it will still be some time until we see them regularly on the roads!

The search is on for greener, more sustainable solutions to fossil fuels as consumers increasingly turn to renewable energies. However, the electric car didn’t just come about yesterday: the first prototypes were invented in 1834! Given the strong competition from steam-powered cars and combustion engines and the lack of performance and autonomy of electric models, this option was set aside for a very long time—until Elon Musk and his company Tesla Motors brought it back to life. In 2010, Japan automaker Nissan introduced the first 100% electric car for the general public, called the Leaf, from the acronym “leading, environmentally friendly, affordable, family car.”

Look up ahead. The future is just up the road!