So what if you went on a trip…to Canada? There’s no need to fly off to far-away countries for magical landscapes when crossing this country offers plenty of magnificent routes. Each of them proves it’s not the destination, but the journey to get there that’s the real attraction. From Alberta to Quebec, through Ontario or British Columbia, discover kilometres of getaways and breathtaking expanses.

Beaches, fjords, mountains and tundra stretching as far as the eye can see, these landscapes never cease to amaze us with their beauty and diversity. 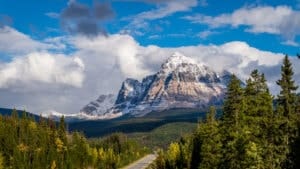 Nearly 3,000 km long, the Yellowhead crosses four provinces from east to west, and linking Winnipeg to Graham Island.That’s hundreds of kilometres to lay your eyes on 360-degree views of amazing landscapes. You have a choice of plenty of scenic stops along the way, as the entire highway is magnificent. It’s often said that taking the Yellowhead is like journeying through parks within parks, as you cross no fewer than 90 provincial and national parks and historic sites.

You’ll be seeing a wide variety of wildlife, so keep your camera ready! 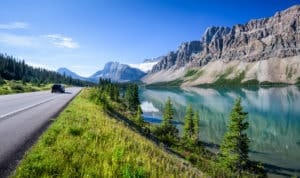 Also called the Icefields Parkway, because of the over one hundred ancient glaciers along the way, Highway 93, which links Lake Louise with Jasper, has a reputation as the most scenic highway in the world. All along its 229 kilometres, you’ll find wild, authentic landscapes of snow-capped mountains and imposing rivers. Its awe-inspiring nature and plethora of wild species make Highway 93 a must for lovers of the outdoors. Get out of the car for a hike, and you are sure to see wild sheep or deer along your path.
It’s here where Canada’s immense, elusive reputation makes the most sense; a place of beauty, where the chance of crossing paths with a black bear or grizzly means you have to stay alert. 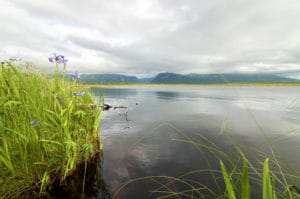 Less well-known but no less a must-see, Newfoundland and Labrador Route 430 starts at Deer Lake and ends at St-Anthony’s, running along a coastline of breathtaking landscapes. Take the time for stops at Gros Morne National Park and Anse aux Meadows National Historical Site, both ranked as UNESCO world heritage sites and well worth the detours. You’ll discover a landscape of contrasts, made up of beaches, bogs and majestic forests. If you love hiking, check out the Green Gardens Trail for picturesque coastal views, and for a shorter family-friendly option, opt for the Tableland Trail. 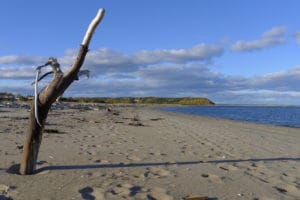 If you ask Quebecers the key route to discover in Quebec they will likely mention the “route des baleines”—the whale route. This highway linking Tadoussac to Kegaska is part of the route 138 and passes through a dozen coastal towns, several of which make up the Saguenay–St. Lawrence Marine Park. You can do some whale watching or even get up close and personal with them by boat. The whale ballet is an amazing spectacle, and a must for your bucket list. For those seeking an even more extraordinary experience, quite a few companies in the region offer sea kayaking: chills guaranteed! 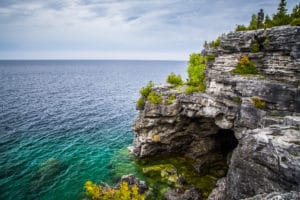 Plan to make several stops along this highway, as the landscapes are magical here: cliffs that plunge into turquoise waters and some of the longest beaches in the country, not to mention plenty of deer and osprey. Prepare to get blown away. Georgian Bay offers countless treasures, including the 30,000 Islands of Parry Sound, to take in by canoe or kayak. Try out a completely original experience when you get to Tobermory, where you can make the trip to Flowerpot Island on a glass-bottom boat and see the shipwrecks below. Not to be missed!

Of course, you can’t leave the bay without having walked the 11 kilometres of golden sand of Sauble Beach on Lake Huron, the pride of Ontario. 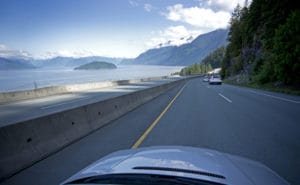 THE SEA TO SKY HIGHWAY

The Sea to Sky Highway (Highway 99) is the only way to get to Whistler from Vancouver along the west coast of Canada. It runs along Howe Sound and a stretch of ocean to reach the mountains, giving it the name the Sea to Sky Highway The landscapes are one of a kind, with abundant forests, crystalline waters and majestic waterfalls. Every kind of breathtaking western scenery is found along Highway 99, as this area is crossed by different climate zones. A bit of caution and patience may be required on the Sea to Sky Highway, because weather conditions can quickly change along the way. 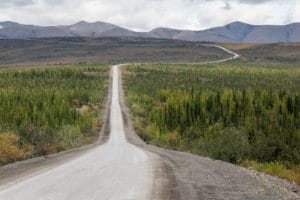 Whether it’s summer, winter, fall or spring, there are no words to describe the views that await road-trippers along this panoramic route that straddles two territories. The Dempster Highway crosses the Arctic Circle and was built principally on old dogsled trails. This goes a long way to describing the nature of its landscapes: windswept cold stretches and vertiginous mountain ranges that appear to touch the sky. Tsiigehtchic, at the confluence of the Mackenzie and Arctic Red River, offers a magnificent panorama of rivers and a transporter bridge to get you across. You can also take a short ferry excursion and breath in the freshest air you’ve ever experienced. Or you can get some paddling and fishing in on magnificent Campbell Lake. 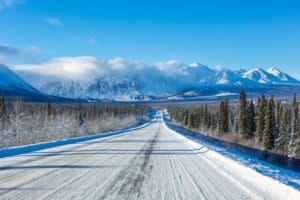 This scenic highway makes the list of a lot of adventurers, and it’s without a doubt the most spectacular way to reach Alaska from Canada. Wild expanses, inhospitable landscapes and sometimes extreme conditions await you. The Alaska Highway is a trip in itself. Although it’s open all year, most travelers prepare to depart between May and September because the climate is milder and the driving is easier. You won’t come across a lot of civilization, but the fauna is particularly interesting. Along grand stretches of spruce forests you’ll meet the local inhabitants: bears, eagles, caribou, moose and even bison. Prepare well for this trip because there aren’t many hotels and restaurants, but the spectacle is truly worth it. 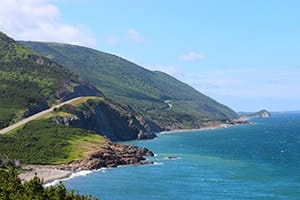 At the north, it hugs Highlands National Park. Reminiscent of Scotland, the lush, rolling hills, canyons and coastal cliffs make a picturesque backdrop for hiking, kayaking, and even whale watching. Don’t miss the incredible views from the Skyline Trail lookout!

Beyond the park, the route invites countless charming stops, from picturesque lighthouses to the colourful harbours of small fishing villages. Some even offer boat tours for puffin spotting. Nab a lobster lunch on the way, or stop for a game of golf on one of the island’s legendary courses. 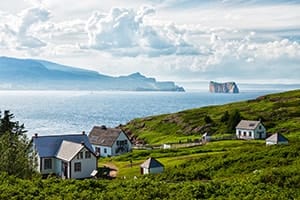 The Route des Navigateurs, or “road of the navigators,” is Quebec’s longest road, running along the St. Lawrence River from the U.S. border all the way to the Gaspé region.

Travellers on this route can make their way through three main regions — Centre-du-Québec, Chaudière-Appalaches, and Bas-Saint-Laurent — stopping at historic ports and quaint maritime towns along the way. To make things easy, white ship wheel signposts mark noteworthy stops, which can be anything from old lighthouses to recovered shipwrecks or lookouts with panoramic views.

It all culminates in the sublime majesty of Gaspé’s famous Percé Rock, where you can breathe the sea air, watch the waves crash, and maybe see some whales. 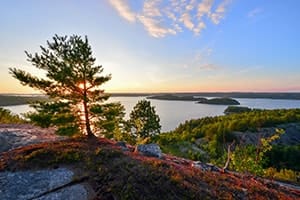 Drive along Route 17 and the shifting landscapes of Ontario will remind you how vast Canada really is. It’s called the Trans-Canada Highway for a reason. And you can cross a good portion of the country — and all of Ontario — with just this one road.

Travel through the tucked-away towns of the Ottawa Valley before coming to the wild, hilly terrain of the Canadian Shield. Next is Algoma Country, a region bordering two Great Lakes and whose hills, forests and lakes inspired many Group of Seven paintings. It’s the perfect stop for photographers and outdoor adventurers!

Follow the road into “lake country” and take in history and scenery in Sault Ste. Marie. Or, head to Thunder Bay — a haven for skiing, hiking, ice-climbing, fishing, and more. Make sure to snap a pic of the Terry Fox Monument while you’re there!

So which route makes the top of your list?

Feel like leaving on a road trip this summer? Call your insurer to make sure your car insurance covers all your holiday needs! Watch our Roadside Stories video to get in a road trip mood.

5 ways to save on your car insurance